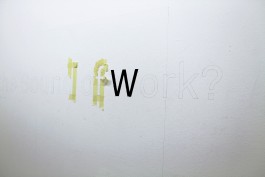 What is the Sound of Work?
Text, painting tools
2018

As the borders between leisure time and work in contemporary societies seem to be blurred more and more, the question of how work can be defined exactly becomes rather difficult to answer. What is the Sound of Work? is a work about work. It articulates a paradox as it seems unfinished. An unfinished work, that is however a finished artwork. An artwork, that makes transparent its tools and process of production. A process, that produces sound as a byproduct, just as every other process does. The work thus attempts to point at the sound of its own production while also asking a viewer about the sound of his or her own work. Where does work and its sounds start and end? During the exhibition, some visitors attempted to finish painting the letters, which was not planned and happened when I was outside for a drink. However, in retrospect this allowed for another perspective to enter the work: how does the performance of someone else, doing my own work sound?