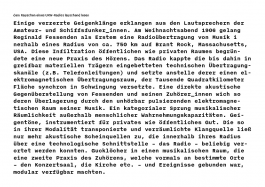 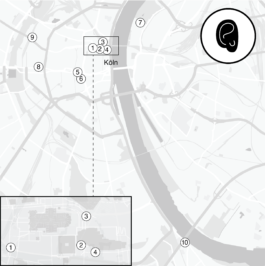 Two Variations on Public Space is a site-specific work, reflecting on the possibilities of sonic practices to engage with public space and the kinds of practices that are already being inscribed into it. The first variation is a piece for ensemble, electronics, text and listening-posts in public space, the second one an installation for radio and text. Two Variations on Public Space has been developed for the festival Acht Brücken / Musik für Köln.

Variation 1
In the first variation, the ensemble describes and imitates field recordings, recorded in front of all the festivals performance venues. During the festival, all the recording positions are marked by ear-stickers, in order to allow the audience to compare their listening experience with the one they had in the concert and furthermore with the ways, the ensemble interpreted and described those spaces. How does our way of listening differ from someone else's? Can this difference be used as a starting point towards a broader discussion on the use of public space and the practices inscribed into it?

Variation 2
The second variation is an installation, consisting of a radio producing static fm-noise and a text to be read while listening to it. The text is supposed to serve as a perceptive preparation of the heard noise and reflects on the history of radio and its spatial characteristics as an electromagnetic medium.

In a concert, both variations are being presented simultaneously. Variation 1 is performed with a radio on stage, that produces the necessary noise. The texts are printed in the program note. Variation 2 can be installed separately as well.

A homepage has been set up to provide additional information such as a detailed interactive map of all the listening-posts and all of the texts:
www.twovarops.tumblr.com