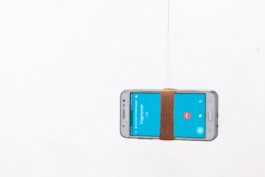 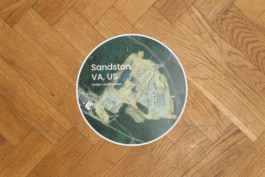 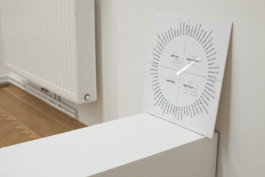 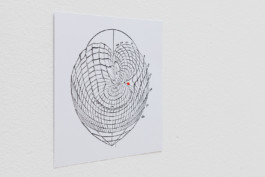 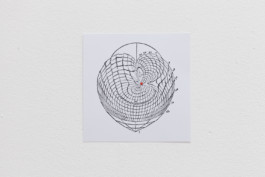 Distant Lovers comprises three works that deal with spatiality, geography and cartography at the intersection of analog and digital spaces and therein reflect upon issues of corporeality, distance and intimacy.

This work stages a sort of spatial paradox. Two smartphones are voice calling each other, hanging back to back from the ceiling. Due to their proximity, two feedback loops* are being produced. Even though sound has to travel only about one centimeter to get to the respective other phone, it has to go through a globally distributed technological infrastructure in order to be able to do so. It needs to be transformed into an electromagnetic signal and sent at the speed of light to an antenna/router that transforms it into an optical one. This is then transferred to the data centers via partly submarine fiber optic cables, where it gets processed before it can make its way back into the same space it was emitted from. This nested space modulates the analog feedback. It turns it into an audible trace and dynamic measurement of a sonic spatiality, primarily inhabited by voices. Voices that, as corporeal imprints or bodily missiles (Dolar, A Voice and Nothing More, 2006) project fragments of bodies where non are present and construct intimacy where proximity is absent. Enameled wire is wrapped around the phones and connected to an amplifier and speaker, thus acting as an antenna that catches and makes audible the electromagnetic signals emitted by the phones.

In 1964, the American inventors Reyn Guyer and Charles Foley developed Twister. Being a financial failure at first, it became a success and later pop cultural phenomenon after actress Eva Gabor played it with Johnny Carsons on his The Tonight Show in 1966. Advertised as “the game that ties you up in knots“, it produces both strangely twisted bodily postures as well as a weird form of intimacy, that prompted their competitors to accuse them of selling “sex in a box“ (en.wikipedia.org/wiki/Twister_(game)). It was the first popular American game to use human bodies as playing pieces and as such seems to mirror the presently growing blur between the distinction of product and consumer in what Shoshana Zuboff calls surveillance capitalism. The colored circles of the original game have been replaced by satellite images of Facebook’s data centers that also host WhatsApp, the app used in work 1. The distances between them have been enlarged. An almost unplayable setup in an attempt to visualize a pile of globally deforming, twisting, touching and entangling bodies in a game that localizes the cloud in a 4x4 grid of actual places.

Johannes Stabius (1468 – 1522) was an Austrian humanist, cartographer, historian and natural scientist, living in Vienna. In 1502, he developed the worlds first equal-area map**, a heart shaped map that was used until the 18th century. While the heart now symbolizes primarily romantic love and likes, it was understood as a much more complex organ in the Renaissance.

It was the primary receptor of sensation, the seat of memory, the portal to wisdom and above all the governor of that microcosm that is the human body. Many of its supposed functions are today attributed to the brain. Cosmologically, the heart was the Sun, center of the world. […] Presenting a world map in the shape of a heart thus connected the image of a newly expanded globe to the most intimate core of the human individual, to the idea of rule and to the majesty of monarchy and empire. (Cosgrove, „Geographical Imagination and the Authority of Images“, 2006).

This work is based on the graticule – a network of lines representing meridians and parallels – of this projection by Johannes Werner, a Nuremberg pastor and mathematician who refined its mathematics and published it in 1514, giving it the name Stabius-Werner projection. Using digital image processing, I distorted this original grid by taking the positions of the same data centers shown in work Nr. 2 and dragging them to where Vienna would be on this map.

** Since it is mathematically impossible to accurately depict the surface of a sphere on a two dimensional plane, either shapes or area measures are deformed. An equal-area map is one, that accurately displays the area measure while distorting shapes.