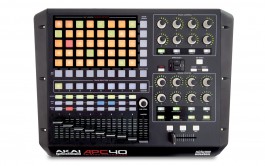 Disco Interface is a work that is inspired by the often invisible physical and mechanic virtuosity of DJs. It has originally been composed for a concert in a club context.

Its core is a simple generative video-game, which has been programmed for the AKAI APC40 with Max/MSP. Its various tasks (e.g. beat-matching, color-matching, tuning, pattern recognition) are based on typical tasks of DJs. These tasks are designed to initiate a diverse set of physical interactions between performer and controller, that result in different kinds of rhythmic and sonic structures on the controller itself. The MIDI-controller thus functions as a percussion instrument, the game itself as the score of the piece. Since being almost inaudible in a live-context, a contact microphone on the MIDI-controller captures and feeds these sounds into the other performers headphones, who have to reproduce them with their instruments in real-time. Furthermore, the use of a contact mic amplifies not only the interaction itself but also the sounds of the internal electronic circuits, leading to two different sonic layers between which the performers can choose freely. The live-electronics and the synthesizer are controlled by an algorithm that measures different aspects of the interactions between performer and controller (reaction time, amount of needed attempts, failures, amount of finished tasks etc.).

Disco Interface has been written for and is dedicated to Pony Says. In 2019, I revised it, composing a version for a larger ensemble of eleven musicians and wrote an extended second part.