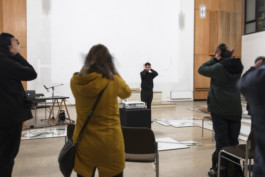 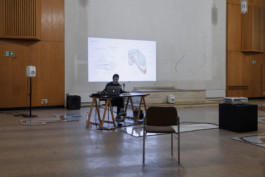 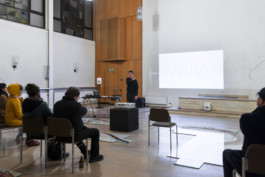 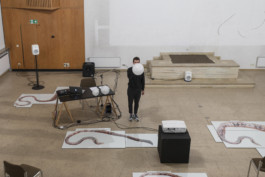 Based on the physiologies of human listening and the voice, Tactile Acoustics is an attempt to outline an acoustics of touch at the intersection of bodies, space and sound. Through speech as well as performative, participative and musical means, combining scientific with fictional narratives, it reflects on the idea of sound as corporeal excess. Therein it focuses on the voice, the primary human instrument of sonic production as a dynamic bodily excrescence. A force, that bends materials across micro- and macroscopic, organic and synthetic domains to mimic form and movement of a speaking body, more specifically of its vocal apparatus. Taking this as a starting point, it investigates the relations between speaking and listening as well as sound as physical (Schall) and as psychoacoustic phenomenon (Klang) to allow for a different perspective on the performance itself, being an event that is characterized by a single talking body and a listening audience.