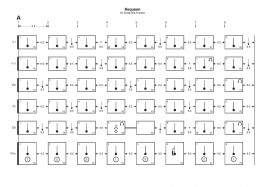 Etudes of Attempt I
Requiem
for string-quintet, piano and headphones
8:30 min
2016

A piece around unpredictability, failure, indexicality and instruments/sounds as measuring devices.

Five strings: every player repeating the same note over and over again while detuning the string downwards and correcting the intonation, a choreographic glissando. The piano provides a frame of reference. Every player is equipped with a pair of closed headphones, listening to a different click track. Sometimes the headphones get repurposed as speakers when pointed towards the audience and playing synthesized reference-pitches of the respective players note. In the beginning: a tutti-chord and un-timed detunings; two actions that change place over the course of the piece. In the end: a choreographic detuning-tutti and un-timed playing actions. In between: sporadically spread freezes that accentuate the movements of the instrumentalists as part of the constitutive parameters of the piece.

"Requiem" points towards the hidden passus duriusculus of the detuning-actions and the constant shift of constitutive parameters within the piece, meaning that every layer which seems to be central to it slowly unmasks itself as a mere carrier of another one. The tonal chord as a recognizable shape, that allows to perceive the attempts to correct the intonation more clearly, the detunings themselves as mainly choreographic entities towards the end of the piece, the gradual disintegration/fraying of the tutti-chord as a mean to mask the introduction of the tutti-choreography of these detunings and the headphones as click-track-providers that turn into loudspeakers.

Etudes of Attempt I: Requiem has been written for Ensemble Ambitus and is dedicated to Martha Schultz for her support with the scores layout.