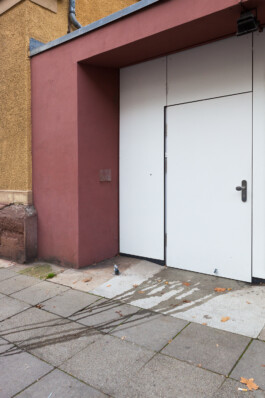 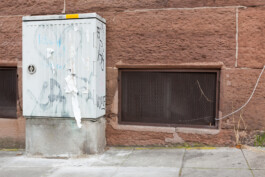 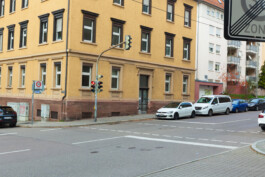 Kennst du den Ort is a work about longing, wanderlust, melancholy and community.

Through the closed and locked door of the exhibition space, the sounds of an ocean, a shore can be heard on the street, occasionally drifting into an abstract soundscape through sound effects. By placing two loudspeakers behind the door, an imaginary space, that contrasts the urban soundscape and its materiality is simulated out of the audiences’ reach. Additionally, the door seems to leak with water seeping through onto the pavement.

Around the corner, one can hear a sequence of sustained chords, sung by a choir, coming out of a small barred window to the cellar of the same building. Also here, a loudspeaker is positioned out of sight, in the dark cellar, simulating a community of singing bodies within the inaccessible space. The choir was composed of three friends and myself and was recorded via zoom with each participant singing in another location. The vocal composition was based on a modified version of the first verse of the Mignon poem by Johann Wolfgang von Goethe. Goethes poem speaks of Italiensehnsucht, the yearning for Italy, a common topos of artistic production in Germany, particularly in the 18th and 19th century. In the modified version, the place of desire becomes a fictional one, stripped of any national boundaries. Our musical rendering is a sort of practice in synchronization. Each of us chose a random pitch. With each new chord, we tried to get closer to each others pitches and find a common one. Whenever we reached a common pitch, the process started over until all words of the poem have been sung. Through this attempt in finding a shared vocal form and corporal state, we tried to intertwine a text about the longing for another place with a singing community, that is, in its digital virtuality, itself an expression of a yearning for a community by geographically separated bodies.