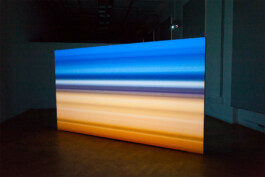 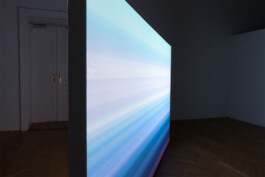 The Wall of Sound is a video installation, inspired by the music production formula of the same name. Developed by American record producer Phil Spector at Gold Star Studios (LA, US) in the 1960s, this formula heavily shaped the sound of the decade. At its core, the Wall of Sound is a series of spatial compressions. Firstly, Spector packed an unusual amount of musicians into the small studio space, doubling or tripling every instrument. Secondly, he transmitted their recorded sounds into an echo chamber, where, due to the overlapping reverberations, the sounds condensed further. Thirdly, he recorded everything with a single microphone, producing a monophonic recording that completely collapsed the original spatial setting into a vibrating spatial trace that lacked a right, a left, an up and a down. In the Wall of Sound, the generic acoustic characteristics of mono recording – its spatial compression – provide the logic to organize bodies and sounds in the real world. The monophonic space is pure reverberating depth. It is a dense and blurry orchestral sound, where single instruments and bodies are compressed to a degree where they can’t be clearly distinguished from each other any more. A sound that, as it was emitted through the transistor radios and jukeboxes of the 60s, filling up the space around them, felt so massive, it became known as a Wall of Sound.

In my case, the Wall of Sound is a literal wall, interfering with the architecture of the exhibition space. The silent video projected onto both sides of this wall is based on found footage from the recording space of the Gold Star Studios in the 60s. In an attempt to find a visual equivalent of the sonic spatiality of the Wall of Sound, I compressed its horizontal dimension to a single pixel and then stretched it again to the size of my wall. Just as the production technique blurs the sounds of multiple bodies and instruments into a single sound that transcends its sources, the video processing makes it impossible to perceive the original footage. Instead it generates an ever-changing stack of pixel-thin lines, a video following a purely vertical logic without a clear sense of left and right.