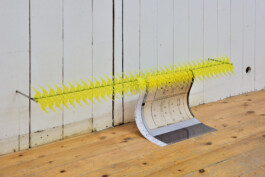 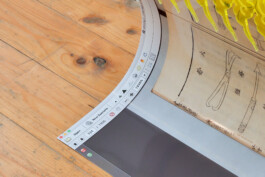 shining [...] the rays of our struggle
Fluorescent acrylic, stainless steel, print
Title based on The Hymn of EAM, Greek partisans/Vassilis Rotas (1941)
2022

Part of Oh, you song, [...] head for the bright sun, a series of works dealing with the intersecting histories of fireworks and gunpowder, warfare, pipe organs, church music and representation. All titles of the project are excerpts of lyrics from various versions of the Soviet Estrada song Katyusha, released in 1939.

Like all other pieces of this project, shining [...] the rays of our struggle presents a stumbling melange of citations from different historical contexts. The laser-cut ornament is based on the organ's ornament in Raphaels Ecstasy of St. Cecilia as well as an illustration of a cloud in the Wujing Zongyao, a chinese military manual from 1044. A scan of this book, depicting two different bombs makes up the print. The user interface of adobe acrobat, that frames the scan is redesigned with custom icons to resemble that of a rocket launcher.