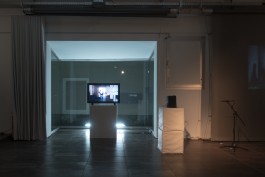 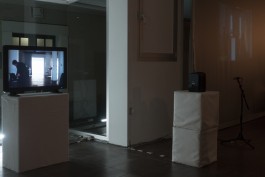 Produktionsschleifen III
Room with a Lot of Its Own Making
Video screen, projector, speaker, microphone, Max/MSP
2017

Produktionsschleifen (a possible translation could be "production-loops") is a series of pieces, that draw their inspiration from Robert Morris' famous Box with the Sound of Its Own Making from 1961. A piece, where a loudspeaker is put into a box, playing back a track with the sound of its own construction.

In Room with a Lot of Its Own Making, the construction of an exhibition is recorded, cut into parts and then played back via a screen, positioned according to the recording angle and a single speaker. A microphone is placed in front of this speaker. An algorithm then attempts to re-synthesize the video of the construction, based on the similarity between the original sound and the sound that is captured by the microphone. Since the spatial channel between the speaker and the microphone is not an isolated one, every sound that is made during the exhibition (the sounds of the other installations, people walking and talking…) interferes with and distorts the signal to be analyzed, making the algorithm jump back and forth between different moments of the construction. The room acts as his own interpreter.