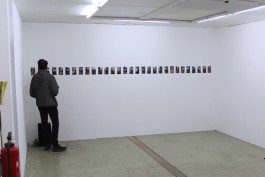 Performing Borders is a work, that reflects upon the materiality and effects of borders as performative and temporal constructions, rather than static architectural markers. Constructions, that – just like sound – are dependent upon continuous acts of actualization (affirmative or negating) to not fade away. Borders seem to function as scores, being reliant on performances and interpreters, be they state citizens, the police, a juridical apparatus, a theoretical framework or certain readings of history.

Performing Borders is based on a performance, in which I was running along the border of the Container City Stuttgart, an area consisting of galleries, cultural bureaus, architectural firms and art studios, among those the gallery within which the work was later shown. While running, I was using a drumstick to "scan" the surfaces of this border, similar to a needle, scanning a phonograph record.