Earpieces
The Earpieces are a collection of works for headphones and additional materials – mostly photos and text –, that each try to simulate a certain listening situation. This happens by interfering into the equation of microphones and ears in traditional stereo recording, where two microphones correspond to the left and right channel of the later used headphones and thus to the respectively left and right ear. Using this constellation as a starting point, the Earpieces try to imagine ways of listening that aim to construct other forms of spatial and aural perception.

How would it sound, if two people would put your ears into their mouths? Earpiece 1 is a work, engaging with a somewhat weird form of intimacy and the phallic imagery of its simulation. 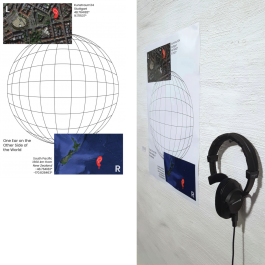 Etude is a site-specific installation, that uses a special single-ear headphone, playing back a field recording that has supposedly been recorded on the other side of the world (of the exhibition space*). Human aural perception of space is based on a distance of 14 cm between the ears. On the basis of this local positioning, the brain calculates the perceived space in a way, that enables a coherent spatial orientation. In Etude, this distance is extremely enlarged. Therefore, the brain cannot construct a perceivable spatial whole, space appears deconstructed into two incompatible signals – the sounds of the exhibition space and the sounds of the other side of the world. Guided by the idea of having a head with the size of the world and thus ears on opposite sides of it, Etude is an attempt to alter the perception of the exhibition space itself and thus create a representation of the difficulties of understanding and perceiving the global transnational economic and political structures, that constitute local every day experience.

* Therefore, every time this work is installed a new soundtrack and poster is being produced.

In the late 19th century, the Viennese Gürtel developed out of the Linienwall, a defensive wall around Vienna’s suburbs. Today it is Vienna’s most trafficked street and an urban marker between the more expensive middle-class inner districts and the more cheap lower class and migrant outer districts. Performing Borders II is based on a performance, in which two performers stand back to back in the middle of the Gürtel, each equipped with a microphone and a smartphone with camera. After starting to record, they slowly walk away from each other and the Gürtel, into the two adjacent districts. The two microphones correspond to the left and right channel of the headphones used later. Thus, this simulates a growing distance between the ears of a later listener. Human aural perception of space is based on a distance of 14 cm between the ears. On the basis of this local positioning, the brain calculates the perceived space in a way, that enables a coherent spatial orientation. Thus, through the growing distance between the two performers, the initially coherently perceived space is slowly deconstructed into two incompatible signals, each comprising the sounds of its respective district. Districts, whose sounds result from certain activities, that are embedded into an urban socio-economic hierarchy. By simulating a form of listening, that perceives a continuum between these two spaces, starting at the border I tried to mark acoustic as well as social space as inherently constructed and therefore open to change. The installation is made up of the recording as well as video-stills and a photo, documenting the performance.