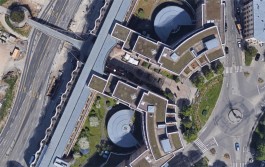 The Augmented Apparatus attempts to technically enlarge the average distance between our eardrums of 14 cm to about 10 m. According to the position of our ears, two microphones are positioned to the left and right of the listener and fed to the respective channels of a pair of headphones. Because the brains "algorithm" to construct our perception of space is based on the initial 14cm, the natural stereo image, which means the coherently perceived acoustic space, that allows us to orientate ourselves, is divided into two distinguishable signals, one in each ear. Therein, I tried to render explicit, the twoness of our ears as well as the artificiality of sonic space.

The installation has been set up in a small pedestrian area with one microphone facing one of Stuttgart's largest and most trafficked streets and the other one facing a small bar next to some stairs that lead to a more quiet neighborhood, thereby also amplifying the architecture of the installations site.